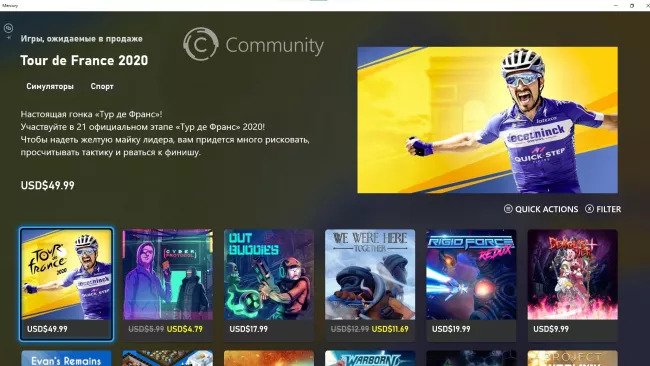 Microsoft seems to be debuting a new storefront for the Xbox Series X, which could feature a more impressive interface that the Xbox One due to a new update known as ‘Mercury.’ Currently, purchasing games on the Xbox One website can be a rather mixed-up experience because of the complex drop-down menus and icons that have different sizes.

The Mercury update will make the website easier to browse, thanks to a side menu and much more similar content sizing. The leak was first published on a Windows Central report, where senior editor Jez Corden experienced the Mercury update.

He posted screenshots and a video in his article, showcasing an Xbox Store that’s clean and easy to navigate. While the present Xbox One consoles will receive the Mercury update after it launches, Corden said that the Xbox Series X would employ this storefront to sell games as well.

The major difference between Mercury and the Xbox One interface is that the upcoming update uses a side menu that allows users to browse quickly through search, sales, and other ways to explore the store. In the current Xbox Store, you have to scroll all the way to the top of the page to change options or head back to the earlier menus. This can be rather annoying and can slow things down considerably.

In addition, the Mercury app is animated and makes the change from one menu to another smooth. At the moment, when users select an option in the Xbox Store, it loads the next screen after becoming black for a second. All the features included in the current Xbox Store, such as reviews, trailers, and search options, will be transferred to the Mercury app when it is released.

We’re only curious whether Mercury will also be launched for Windows. Every game on the Xbox Series X will be playable from PC as well, and Microsoft has employed a rather significant amount of effort to guarantee parity between its Windows-powered PC and console releases. A Mercury interface on a PC could be an achievement for Microsoft to be proud of, more so since the Microsoft Store on the OS is currently a dull and irregular experience.