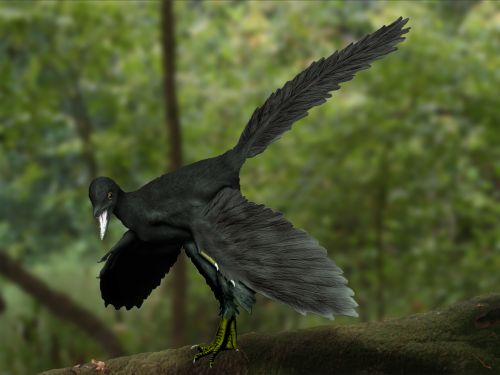 A new study has revealed that a feather discovered in the 1800s did actually belong to a dinosaur resembling a bird. Back in 1861, German paleontologist, Hermann von Meyer found an ancient fossilized feather in limestone close to Solnhofen, Germany.

The feather was believed to a bird-like dinosaur known as Archaeopteryx, but in the following century and a half, researchers began to argue that it belonged to an undiscovered species. As years passed, scientists realized that many, if not most, species of dinosaurs were feathered.

Now, researchers from the University of South Florida (USF) have final proof that the ancient feather did indeed belong to the Archaeopteryx, also known by its German name, Urvogel.

The experts analyzed the key nine attributes of the feather, such as the long quill, together with data from modern birds. They also cross-referenced the collected information with the 13 known skeletal fossils of the Archaeopteryx.

By cross-analyzing the data, the scientists were able to conclude that the feather did belong to the species, putting a century-old debate at rest.

Lead author Ryan Carney, assistant professor of integrative biology at USF, said: “There’s been a debate for the past 159 years as to whether or not this feather belongs to the same species as the Archaeopteryx skeletons, as well as where on the body it came from and its original color. Through scientific detective work that combined new techniques with old fossils and literature, we were able to finally solve these centuries-old mysteries.”

Researchers managed to gather some more details about the fossil using modern technology. An electron microscope revealed that the feather was coming from the dinosaur’s left wing, which lived around the Jurassic period, some 15 million years ago. The team also found melanosomes, which are microscopic pigments, revealing that the color of the fossil was matte black.

Previously, researchers have argued that the Archaeopteryx species was the beginning of the dinosaur and bird crossover.