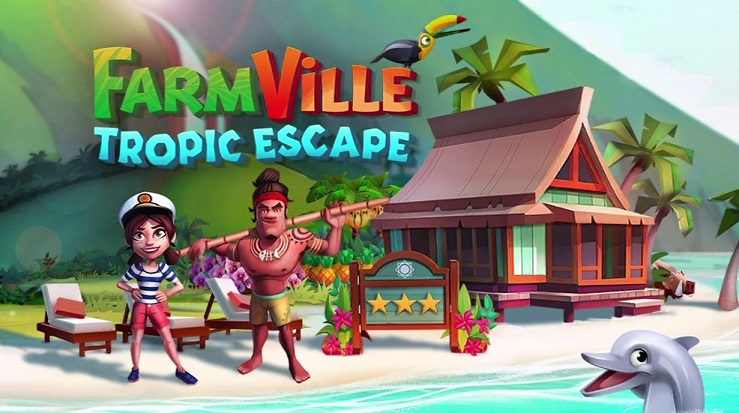 FarmVille 2: Tropic Escape​ is one of the amazing games in the incredibly popular FarmVille franchise. The tropics-themed title helps you escape to an island in which you get a good share of adventures and lots of mini-games to kill boredom.

The title has players seek adventures around their own tropical island while farming various fruits and vegetables, create fun drinks and meet cute animals. They get to discover all the unique crops and exotic animals possible in the in-game home. There’s also a beachside inn which gives you a glimpse of how life in paradise would look like.

FarmVille 2: Tropic Escape​ offers players story-based quests that need to be completed with island guides like the archaeologist and surfing expert. You get to explore a volcano and an ancient monkey temple, discover hidden treasures and rare items in secret chambers, as well as explore unmapped areas to find more secrets.

The gameplay also revolves around creating island workshops and designing your own in-game paradise. You can purchase a Tiki Bar, Sushi Stand, Artisan Workshop, and more; also, you can expand your inn and hire guides to take care of visitors.

There’s the option to build a Wildlife Center on the island as well, with the help of Ting, the wildlife guide. Attract rare and exotic animals to your location, such as Iguanas, by feeding them, and get rewarded by capturing images of the animals as souvenirs for the guests.

FarmVille 2: Tropic Escape​ also allows you to trade with other players using a trade boat. The more coins you have, the more things you can do on your island.

The most recent build for the game has been rolled out, and it is now available. FarmVille 2: Tropic Escape 1.85.6188 update comes with a new mission that requires you and other islanders to tack down and return some of the missing monkeys to the forest.​